We have a bit of snow on the ground this morning, although its not as much as we had yesterday afternoon before it started raining. It was actually a few degrees warmer last night than it was during the day.

Last week we received our first piece of Italian junk mail. Katrina said it made her feel like an official resident of Italy. We still get junk mail from the US. Its amazing how much junk mail is sent first class, which the post office will forward all the way to Italy. Our favorite junk mail are the cards telling us that there is a new house for sale in our neighborhood. Ha!

I decided to pay a visit to Stazione Centrale, the hobby shop in Milano. Normally we take the Metro into the city, get off at the Duomo and ride the streetcar to the shop. Today I decided to give driving a go, since the route looked pretty easy on Google. It was and I made it just fine. We normally don't drive into the city. Driving is not that difficult, but parking is a nightmare and/or can be expensive. I found a lone spot, on the sidewalk, just down the street from the shop.

One sidenote concerning my drive. There is a toll booth on A51. It costs 1.60 euro each time you pass through. I only had 50 euro bills in my wallet and only .50 cents in change. I gave the attendant the 50 euro bill. He asked me for something smaller. I apologized and said that was all I had. He gave back the 50 euro bill, raised the gate and said "Arrivederci."

As I mentioned in a previous blog, the shop is under new ownership. All the trains are on sale, so I thought they were clearing them out for toys. I found out today that they are just thinning the inventory so that they will have room to carry other hobby products, Legos, model ships and antique toys.

I ended up buying an ACME Trenitalia locomotive Brandon and I have been eyeing since we moved here. I also bought two regional (different from commuter) passenger cars, also made by ACME. ACME is a 'newer' European model train manufacturer based in Milano. Now time for the great debate. Do I heavily, and I mean heavily, weather the cars and maybe even 'tag' them with graffiti so they look realistic? Or, do I leave them clean and beautiful? 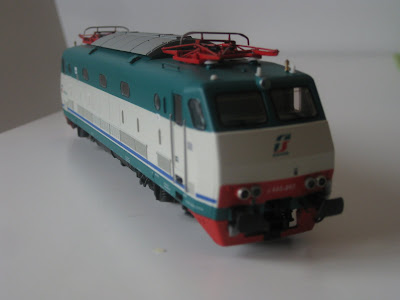 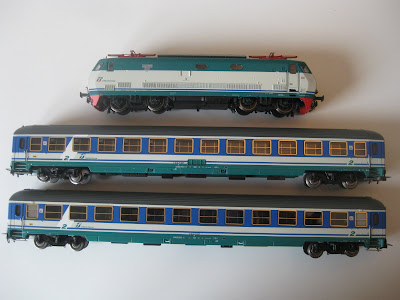 Katrina and I watched three episodes of 30Rock earlier this evening. That show cracks me up. It's well written and totally crazy.

Ah, tomorrow is Super Bowl Sunday. Unfortunately the game will be on at 12:35am, Monday morning. Oh well, go Saints!
Posted by Patrick at 1:16 AM