I had my latest Weight Watchers meeting this morning. I lost 1 lb, which is excellent since I had several good days and several bad days this past week. My over loss is 7.2 lbs so far.

Its a new week and I have some goals to get through Thanksgiving. Its about being thankful....right!
Posted by Patrick at 1:30 PM No comments:

Katrina emailed from Italy this morning (evening for her) with an update concerning our move to Italy.

The relocation agent in Italy has a December 16th government appointment to get the work permit for Katrina. Assuming they don't request any additional paperwork, we should have our permit that day. This would put our move into gear and we would start preparing. The next steps would be: visiting the Italian consulate in Portland for our visas, a preview trip to Italy, and start working with the relocation and moving agents to prepare for our move.

Assuming the work permit is obtained on the 16th, we could be moving to Italy by mid to late January.
Posted by Patrick at 10:34 AM No comments:

I had my latest Weight Watchers meeting this morning. Jena does a good job of inpiring everyone. We talked about making it through special occasions, specifically Thanksgiving.

I lost 2.6lbs for a total of 6.2lbs lost so far. My progress this week was a bit of a surprise since I had a pretty bad day on Saturday. I ate out and made bad choices. This was followed by a snack and soda on the 4 hour drive home from Tacoma.

I bounced back on Sunday and got right back at it. It feels good so far and I look forward to the weeks to come.
Posted by Patrick at 11:40 AM No comments: 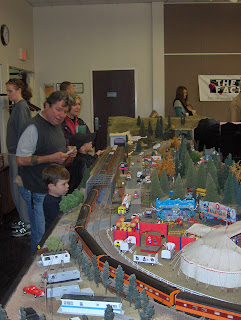 I sponsored my 5th annual Worlds Greatest Hobby Model Train Show at the Corvallis Benton Public Library this past weekend.

I started this show as a way to show my layout to the local community, friends and family. Since I have been travelling all over the Northwest with it, I thought a local show would be fun.
5 years later it has become a Corvallis fall family tradition. Each year we get 500+ visitors at the show, give away over $1000 worth of door prizes and donate an average of 500lbs of food to Linn Benton Food Share. 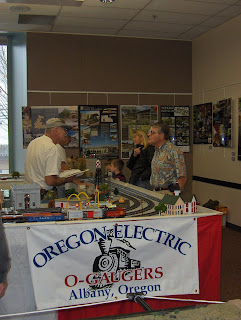 One of my favorite aspects of the hobby is sharing it with the public. I love to share ideas with new and veteran model railroaders. I also love to see the fun and joy it brings to the families, especially the kids.

Thats why I believe it truly is 'The Worlds Greatest Hobby". 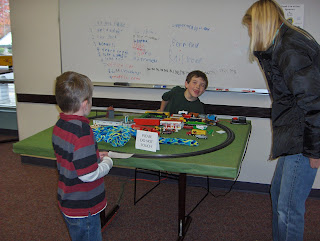 I had my week 3 Weight Watchers meeting this morning. I lost another 2.2 lbs for a total of 3.6lbs lost so far.

I'm pretty happy with that considering I am just starting and I've had a few rough days and activities to deal with. I am keeping my goal of 1 or 2lbs lost per week.

I've been spending more time on the treadmill and less time on the bike, mostly due to the rain. This week I am walking 37 min and running for 3 minutes. I know 3 minutes of running doesn't sound like a lot, but it is for me.

Katrina and I attended a Matt Nathanson concert on Monday night in Eugene. We had hoped out friends would join us, but it ended up being a fun date night with just the two of us.

We arrived in Eugene around 7pm and had to spend about 10 minutes finding WOW Hall. We finally found it because we saw a tour bus parked on the street. We had a good laugh when we saw the hall. WOW Hall is a small building. Its more like a dance hall. I expected to see people lined up at the door, but there was no line.

We parked and went on in. When we entered, we were a bit shocked. What a small place. Like I said, it was like a small dance hall. There must have been 50 people inside. No seats, just an open floor with bench seating along the outer walls. While we were sitting waiting for the show to begin I noticed a familiar face walk across the hall. It was Paul Doucette from The Break and Repair Method (more famously from Matchbox 20). Here he was just strolling across the hall before the show. You would have to pay the big bucks to even get close to him or the other MB20 members at their arena shows.

The Break and Repair Method came on at 8pm and played for 30 min. We were able to stand up front right up against the stage! There were still only about 50 people there.

Next up was Jessie Bailyn. Her band was good and she had a pretty good voice, but she didn't do enough for me to buy her CD and listen to her all the time. She ended up playing for about 45 minutes to about 100 people.

After her set I caught sight of Paul Doucette standing near the CD/Tshirt booth. I quickly walked over and bought his CD and had him sign it. He was very cool and it was great meeting him since MB20 is my all time favorite band.

At 10 pm Matt Nathanson came on and played to about 200 people. Wow! What a great show. We were still right up front. Matt rocked the place and interacted with the crowd all the way through the show. He even played quite a few requests from the audience. He ended up playing until almost midnight.

Overall, we had a fantastic time in a small intimate venue that allowed us to get up close and personal with the bands. All this and only $12 for the ticket.
Posted by Patrick at 10:55 AM No comments:

I had my second Weight Watchers meeting this morning. I weighed in 1.4 lbs less than last week. Baby steps. I have to remind myself that I didn't put this weight on overnight and it won't come off overnight.

I usually feel good if I can lose 1 or 2 lbs a week. I need to focus this week. I was good on Halloween, eating only 5 pieces of candy and two slices of pizza for dinner. I was even good on Saturday. Sunday was a different story. While I was on track with my regular food points, I did catch myself eating too much candy. My problem is that I can't stop. One or two pieces leads to 3, 4, 5...and more.

The Weight Watchers group celebrated one members big milestone today. Frank, who has only been a member since June 23rd, surpassed the 100lbs lost milestone. Wow! It was very inspiring. I need to keep his success in my mind this week as I eat and exercise.

Speaking of exercise, last week I walked on the treadmill 6 times. I missed Sunday and beat myself up about it last night and this morning. This morning I got right back on the treadmill and increased the workout by one notch for my second week. Last week I walked for 39 minutes and ran for 1 minute each day. This week I will walk for 38 minutes and run for 2 minutes each day.

Keep on keeping on. Its my life, its now or never.
Posted by Patrick at 11:07 AM No comments: