We have been in Italy for almost two years and today we finally went to our first 'football' game.  Mike, the other engineer here with Katrina, will be heading back to the US in April, three months before us.  He is in countdown mode.  He recently created a list of things he needed to do before going home.

One of the top things on the list was to attend a football game.  He did some research and found the schedule for Inter, the top pro team in Milan.  Since we wanted to see a game as well, he bought tickets for all of us. 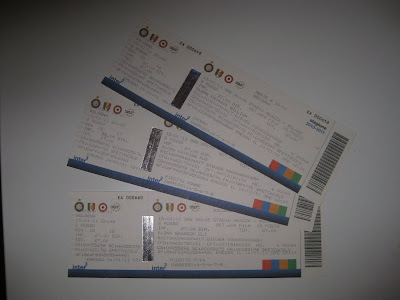 Apparently buying tickets was an adventure.  Where would you buy Inter tickets?  At the stadium?  At a ticket agency?  No, at a bank!!  Who knew?  When he went to purchase tickets, he found out he needed our passport info and codice fiscale info (like Social Security).  So, he had to go back with that info.  Apparently our reserved seat tickets were printed with our names and info on them for security purposes and for ticket fraud purposes.
When I told our friends we were going, everyone was excited for us.  They were nervous about us bringing Brandon to the game.  Apparently, at many matches the fans can cause quite a ruckus, but those are usually the big rivalry games.  We were attending the Inter - Bologna match and it is not a big rivalry. 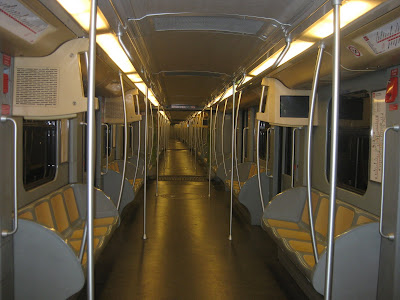 One of the new red line Metro trains, compeletly empty﻿ 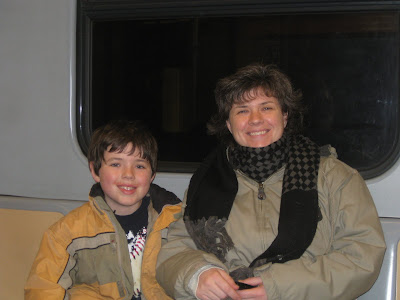 The game started at 8:45pm.  We drove to Sesto and caught the Metro to Porta Venezia, where we met Mike, then continued on to Lotto.  From there we rode a shuttle bus to the stadium.  The stadium is huge.  As big as or bigger than many NFL stadiums.  Outside the stadium were all sorts of the usual Italian food vendor trucks﻿.  To get into the stadium we had to show our passports again, to prove that the tickets were for us.  Our tickets were checked and/or scanned three times before we reached our seats. 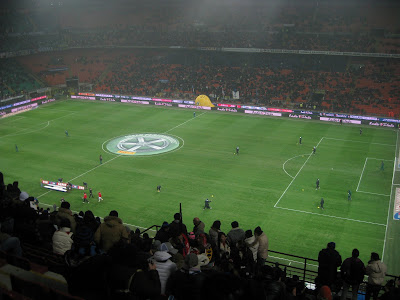 Crew prepping the field for the match﻿ 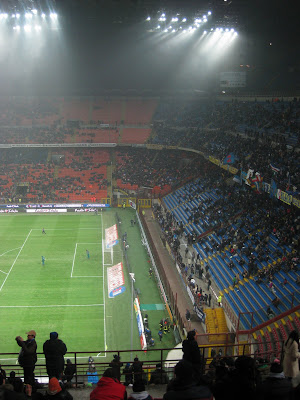 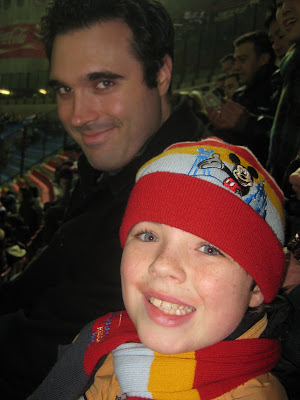 Mike and Brandon
The crowd was lively.  The 'end zones' are the liveliest, with continuous singing, chanting and lighting of flares.  Yes, they light bright orange roadside flares in the stands.  It may or may not be legal, but its tolerated.  It's Italy.
﻿ 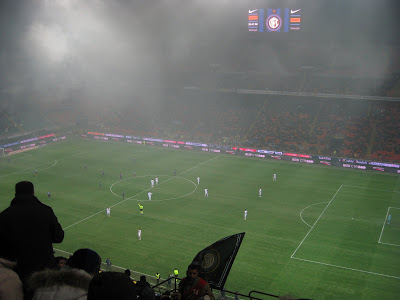 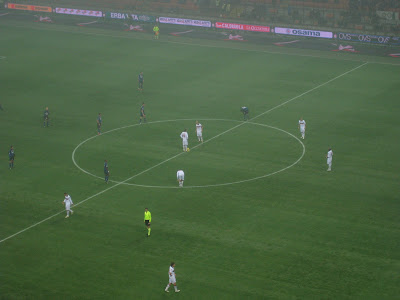 The game is about ready to begin - Inter in blue and Bologna in white.  That is smoke in the air from all the flares that people were burning
On our end of the stadium, up high in the 3rd tier, were the visitors from Bologna.  They were a loud bunch, despite their small numbers.  At one point they lit off a firework that sounded like a cannon inside the stadium.
We found our seats, on the second level.  Not bad.  They gave us a good view of all the action. At times that seemed random to us, everyone would stand up, start chanting something we couldn't understand, and hop up and down. We are not sure what it was for or what prompted it each time.
At halftime everyone around us pulled out sandwiches wrapped in foil and began to eat. They also pulled out their cigarettes for a smoke. I didn't see anyone smoke during the game, but at halftime, everyone smoked.
The stadium vendors walked around selling candy, Coca Cola, snacks and viles of coffee with alcohol for sale. I didn't see any beer for sale, except at the vendors outside the stadium.
﻿ 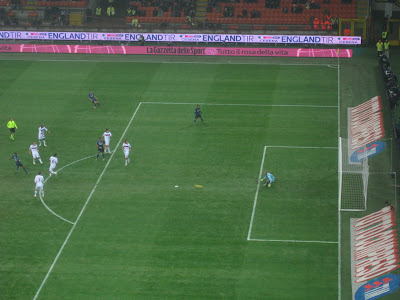 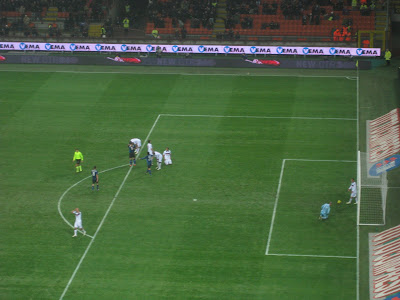 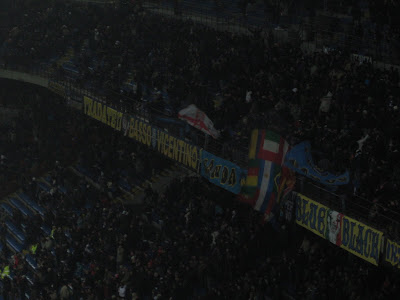 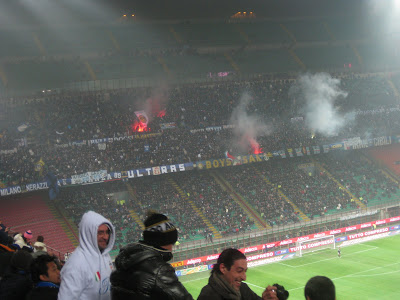 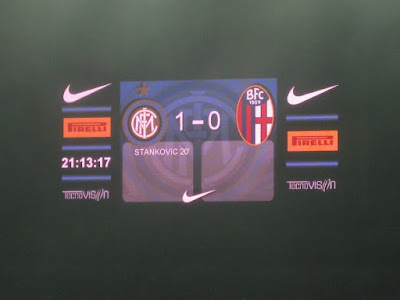 First goal scored a 9:13pm.
When Inter scored a goal, the stadium went wild. Fans lit flares, jumped up and down and began to chant and sing. The scoreboard would flash the name of the player who scored the goal. The announcer would excitedly announce his first name and the fans would chant his last name, over and over again. 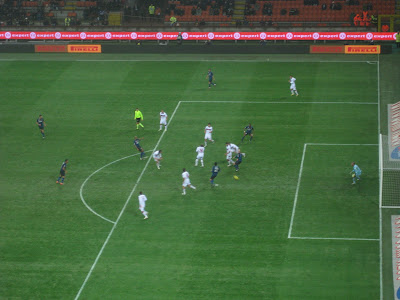 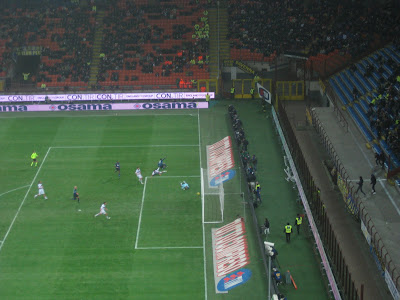 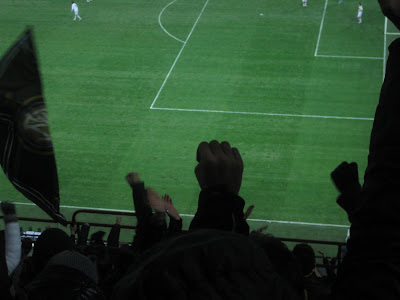 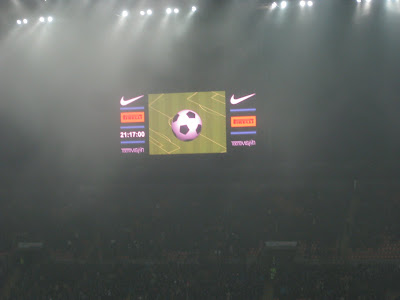 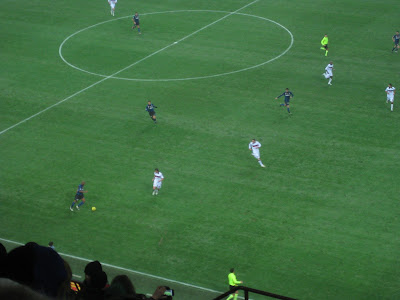 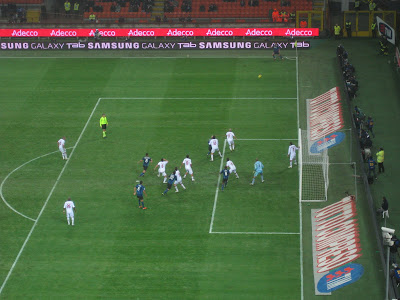 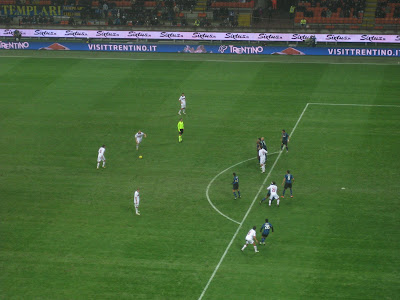 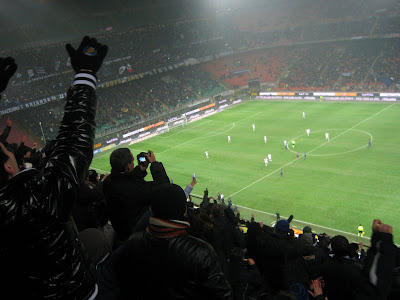 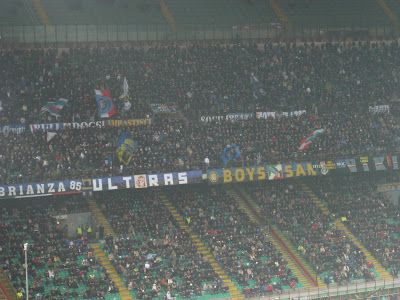 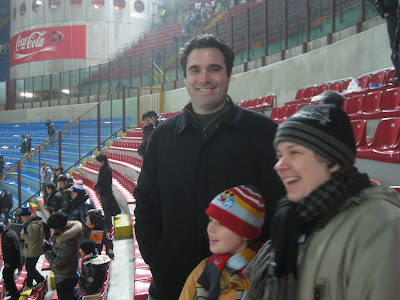 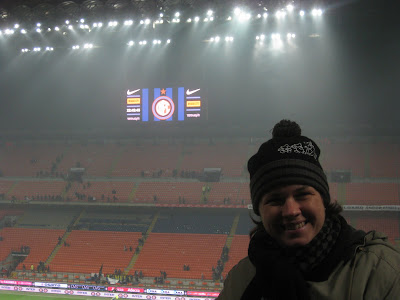 The match lasted until almost 10:45 and was a blast.  Football (soccer) is so much more fun in person.  Inter is an excellent team and they ended up winning 4-1 and are undefeated this season.  Last year they won the championship.
An interesting note from the end of the match.  As the stadium emptied, we noticed that the Bologna fans were still just standing in their sections with security all around them.  Katrina said there was an announcement (which I missed or didn't understand) that they were to remain in their seats until the Inter fans were all gone, then they would be escorted out of the stadium.
﻿ 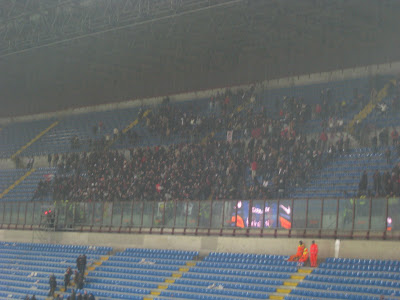 Bologna fans waiting to exit the stadium
At the beginning of the match and at the end, this song was played in the stadium and the words were displayed on the scoreboard.  It appears to be a theme song for the team.  Everyone was singing it!  ﻿


We had so much fun we want to go again.  We also want to see an AC Milan game and a Monza game.
Posted by Patrick at 1:37 PM